All throughout the month of November, the Maver South East team were competing in the Angling Trust Winter League, with the hopes of beating their long-time rivals Preston Innovations DELCAC and become victorious.

With two teams entered under the Maver South East name, Maver Red and Maver Black, it was all to play for throughout the 6 rounds. Alongside Maver South East, 3 other strong fielded teams were battling it out to earn the title of Winter League champions, making for some very stiff competition. 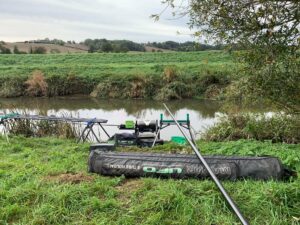 A very low and clear River Rotham at Bodiam

Round one started off the league on a badly flooded River Medway at Barming. A good overall performance from those in the Maver Red team earned a total of 26 points, with PI DELCAC taking the first round with 33 points. There were also podium finishes for Gary Flint, winning the match with 9lb 2oz, and Andy Gouldthorpe holding second with 6lb 15oz.

The second round had the teams back on the River Medway, this time around the Tonbridge area. An extremely close match saw Maver Red gather 30 points, narrowly being beaten by PI DELCAC who managed a 32-point score. Again, another podium finish was on the cards, with Pete Riddy weighing 11lb 14oz and coming third individually.

The third round was hosted by a low and clear River Rother at Bodiam, making the fishing rather difficult for everyone. Maver Red put in another good performance on a tough day and brought back 26 points for second on the day, one point behind the South East Match Group team who gathered 27 points to win the day. There was another great individual performance by Phil Edwards who won the day with 4lb.

At the halfway stage of the league, Maver South East Red were leading the league with a 6 point tally score, 1 point ahead of rivals PI DELCAC. It was very much still all to play for in the final three rounds. 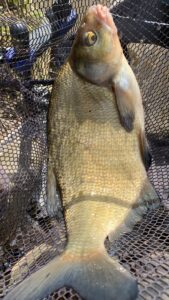 A nice bream caught from the River Rother at Iden Lock

The fourth round was back on the River Rother at Iden Lock, but this time it was up and running off after a recent flood. Maver Red had a stellar performance and extended their lead at the top of the overall standings by winning the day with 33 points, easily beating second placed PI DELCAC who finished with 26 points. An individual win for John Gore with 6lb 13oz and second for Phil Edwards with 6lb 10oz topped off a great day for the Red team.

Frant Lakes was the venue for the penultimate round of the league. With it getting close to the end, every single point was important. Maver Red put together a total of 28 points, being beaten by PI DELCAC who won the round with 30 points, closing the gap at the top of the overall league table and opening it all up for the final round. John Gore also managed another podium finish, ending up third with 14lb.

The final round had arrived, and with Maver Red needing to win the round to take the title, there was a lot of pressure riding on the anglers to bring home the goods. The team was able to put in a massive performance and smash the final round with four section wins and three seconds, giving them 33 points and winning the day. Individual performances from Andy Gouldthorpe with 17lb and for second, and Callum Hutchins with 16lb 8oz for third finished off a brilliant league.

The Maver Black squad managed to finish just outside the medal spots, ending up fourth in the league.

From all at Maver, congratulations to the Maver South East squad, and we wish you the best of luck in next year’s Winter League final!