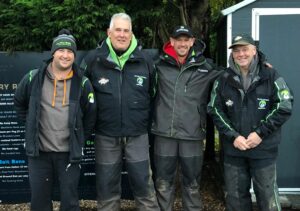 On a cold morning on October 30th, four Maver Dynamite North West anglers woke up to fish the first round of the Teams of Four (4) Winter League at Partridge Lakes, situated in Culcheth, Warrington.

The Winter League attracts some of the best sides in the North West with an abundance of local knowledge, so the competition is very tough. With nine (9) teams of four (4) spread across lakes Covey 1 to Covey 4, a good team draw would prove important.

Winter League team captain Stephen Physick put his hand in the drawbag and did not disappoint. 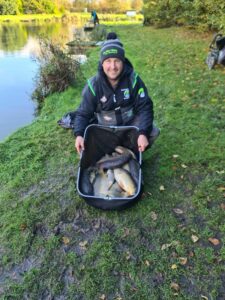 The team had put some good time into practising for this event and had worked out that fishing a cautious maggot-based attack, feeding little and often to not overfeed the swim, was the key to making the most out of their pegs. And this approach paid dividends on the day.

Paul Jaggar off a difficult peg put together 35lb 1oz for six (6) points.

Stephen Physick weighed 64lb oz and brought back two (2) points for the team.

John Paul Nugent amassed a 72lb 10oz bag to secure one (1) point and finish on the overall podium in 2nd position.

A great start to the event for them, and we wish them all the best for the remaining rounds. Congratulations all, from everyone at Maver (UK)