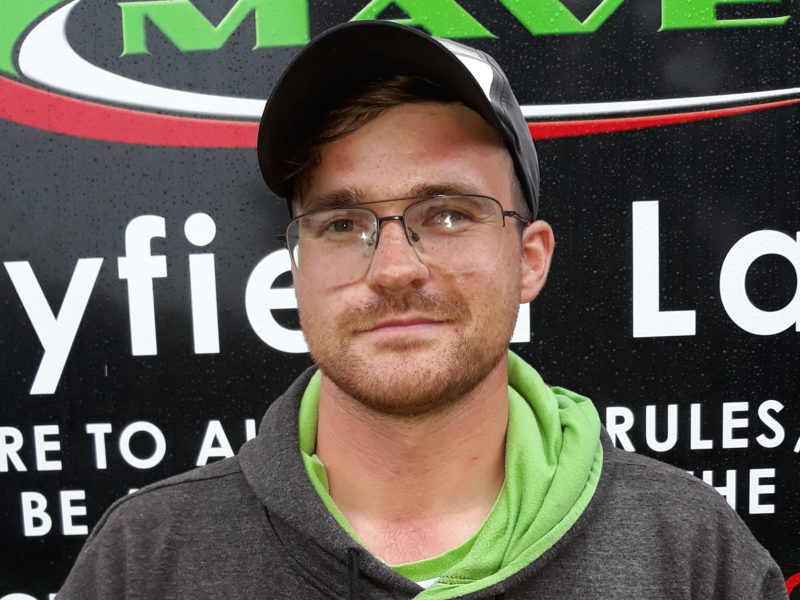 What a contrast in weather conditions for Saturday, from temperatures during the week in the 30’s down to the mid-teens with a bump, complete with heavy rain and blustery winds overnight and throughout the match. This though, did not appear to dampen the spirits of the 119 competitors that made their way to the “Mecca” that is Maver Dynamite Hayfield Lakes for this, MMT qualifier number 20. No-one expected this match to be won with a big weight as the drastic changes in the conditions would see to that but, the changes should create somewhat of a levelling situation. It was, as expected a low weight affair and also extremely close, with the top three places being separated by only 1lb 10ozs and the top two by 13ozs.

Winner, and 20th qualifier for the final was Mavers own Sam Brown, who drew Adams Peg 36. With the wind and rain coming in from his right hand side Sam opted to fish the short pole at 5 metres feeding pellet and banded 6mm pellet hook bait to net 9 Carp and then Bomb and Pellet, where he took 3 Carp for his final tally of 90lbs 15ozs. This will be Sam’s third appearance in the Mega Match This Final and maybe it’s third time lucky.Sam had already qualified for the Maver British Pole Championships in an earlier match so his place will go to the fourth place angler from today.

In second place and running the winner extremely close was Cresta backed angler Perry Stone, an agonising 13ozs behind. Drawn on Island Peg 14, Perry fished Long Pole with Pellets and Caster to net Carp to 6lbs for a final weight of 90lbs 2ozs. Perry qualifies for the Maver British Pole Championships.

Third place went to Doncaster rod Keith Pearson, drawn on Adams Peg 29. Fishing the long pole on the deck and shallow and feeding 6 pints of pellets in the process, he netted Carp to 6lbs to finish the match with a weight of 89lbs 5ozs. Keith also qualifies for the Maver British Pole Championships.