Finally some decent weekend weather for the 109 hopeful competitors venturing to Hallcroft Fishery, Retford. Not perfect, with clear skies, bright sunshine and barely a breeze to put ripple on the lakes in use which were Croft, Bridge Outer, Bridge Island, Moat Outer, Moat Island and Reed which was tipped to provide the top 3 places.

As is normal under these circumstances, the tipsters were wrong, with Moat Island providing 1st and 2nd places and Reed providing 3rd and 4th.

Out in front by a significant margin thanks to a few early lumps shallow at 14 metres, was Kinky Pellet Club angler Carl Roberts. Carl had narrowly missed out by 9ozs on a final placing earlier in the series at Messingham Sands but, he made no mistake this time round. Drawing Peg 2 on Moat Island he started off shallow with pellet to get off to a flying start with some decent sized Carp whilst priming his edge swim with Pellet and corn. Switching to his edge after a couple of hours, he was into Carp almost immediately and stayed with this line to finish the match with a weight of 218lbs 14ozs including a Common Carp of 24lbs to book his place in this year’s MMT Final to be held at Maver Dynamite Hayfield Lakes on Saturday 31st August.

Runner up in today’s qualifier was regular MMT competitor Les Marshall (Barnsley). Les drew Peg 5 on Moat Island and used similar tactics to the winner, starting shallow at 14 metres with pellet then moving to his edge but with pellet. Unfortunately for Les, his shallow line got off to a much slower start than the winners and he was immediately at a disadvantage. Moving to his edge line, he started to catch at a faster rate than the winner, but the fish were of a smaller stamp, so he was unable to make up the gap that had opened up. Les finished the match with a weight of 186lbs 11ozs made up of Carp to 14lbs.

Completing the top 3 places was Andy Seals (Shireoaks) who drew on Reed Peg 42. Using his own mix of Paste at 6 metres, a bait he confesses to use all the time, he was into fish almost from the off, catching steadily throughout the match as well as losing a few in the process to finish the match with 182lbs 2ozs including a 16lb Ghostie and qualify for the Maver British Pole Championships. 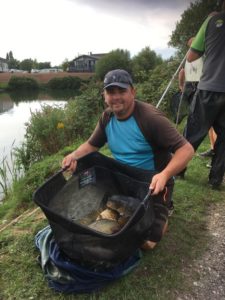