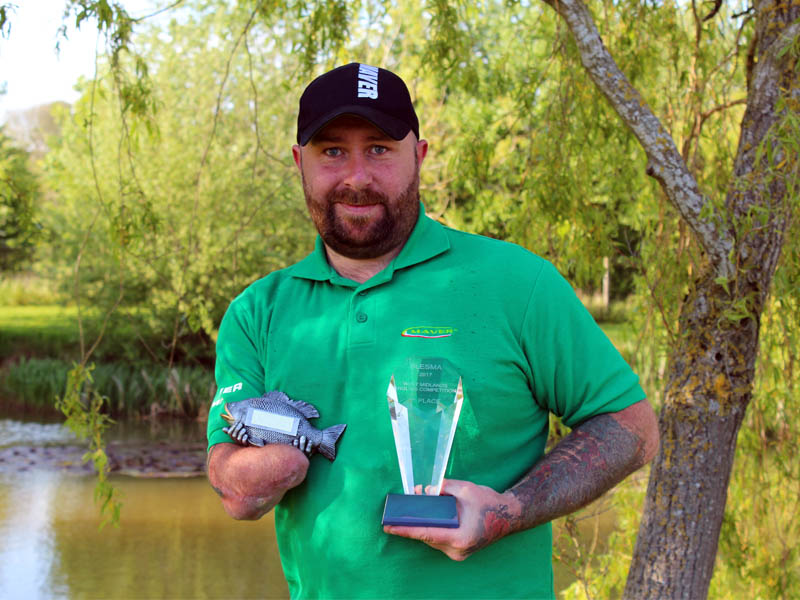 A small group of anglers attended the annual BLESMA West Midlands competition held, this year, at Woodside Fishery. BLESMA – the British Limbless Ex Servicemen Association – is the only Armed Forces charity that supports limbless veterans for the duration of their lives. The charity, which has operated since 1932, helps all wounded servicemen and women who have lost limbs or the use of limbs or eyes to rebuild their lives by providing rehabilitation activities and welfare support.

Anglers from all over the country lined the banks of Woodside pool for their latest get together, all of whom having previously served their country with the likes of the Welsh gunners, Scotch Guards and the navy. Conditions on the day were forecast to be relatively pleasant and, most importantly, dry. However, it was a cold start to the day with plenty of cloud cover and a stiff breeze making things feel much colder than during the week leading up to the event. That, coupled with torrential rain on the Friday prior to the match, left anglers divided as to how they thought the fishing would be affected. It was a slow start to the match for most, but as the day progressed, the weather improved with plenty of sunshine by mid afternoon raising temperatures substantially, switching the resident carp into action.

Winner on the day was Dave Watson, who drew peg 17 on the dam wall. The Hook For Heroes Ambassador and Maver (UK) sponsored triple amputee started his match on the method feeder at twenty five yards with 8mm dumb bells on the hook to find some quality carp. Dave then switched to the pole trying meat long at 10m and down his edge, but could only find skimmers and small carp. After enduring a frustrating forty five minutes to an hour, he decided to go back on his method feeder line to get back amongst the carp with fish to 7lbs to finish the match with 58-04-00.

Dave, who helped organise the event, commented after the match “Thank you to everyone that came and for taking part. I would also like to thank Match-Aid for travelling down and supporting the event as well. The fishery and the fishing itself has been superb. The on-site accommodation is also excellent and, all in all, it has been a fantastic weekend“.

To add to what had already been a day to remember for the Maver rod, shortly after events on the day had concluded, Match-Aid’s Paul Roberts also welcomed Dave as the newest member of the Match-Aid team. Dave will now be working alongside the charity in promoting fishing to people of all abilities and will be a huge asset to the team.

Paul Roberts commented, “It’s fantastic news having Dave on board, especially when taking into account everything he does. He’s a real life hero and we are very excited to be working with him going forward. He has so much to pass on and others can learn so much from him. He’s a true ambassador for the sport“.