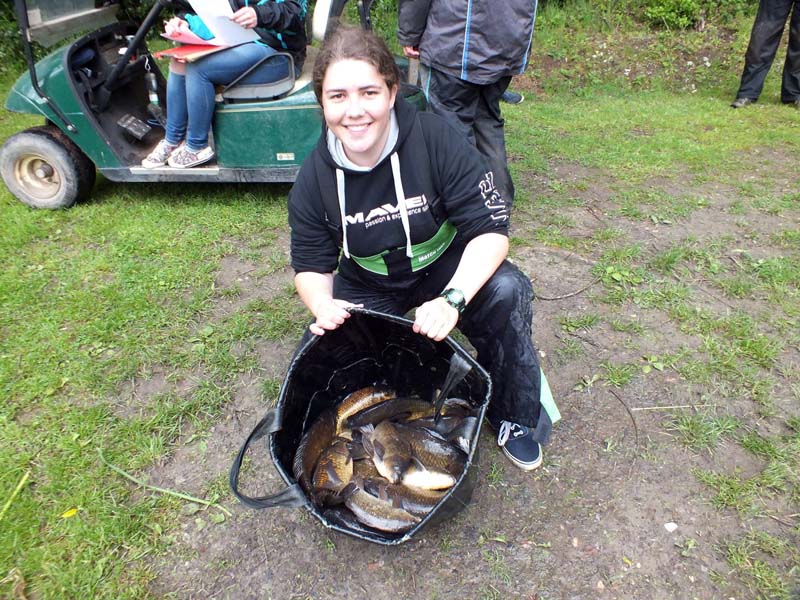 Sarah Taylor recently captained team North to victory as part of the annual North vs. South event hosted at the prolific Tunnel Barn Farm, Shrewley. Given the venue’s central location, it means anglers in equal numbers from both North and South have the opportunity to compete with this year’s event seeing one hundred and fifty five (155).

The event is a fundraising event to help raise funds and support the disabled and ladies national teams who, unfortunately, receive very litle if any funding. The event attracts anglers from all over the country with Midlands-based competitiors having the option to choose which side they fish for – North or South. The event continues to go from strength to strength and has now established itself as one of the larger events on the match angling calendar.

Team North have won the event for the last two years running, so with a potential hatrick on the cards, the pressure was on for Sarah! “I drew peg 1 on Top pool, which I was told is a decent peg as it was situated in what many anglers refer to as ‘the bowl’. I got to my peg only to find that peg 2 had to be added to the draw last minute, giving me less room than I first thought“.

“I set up a 13 / 14.5m line where I aimed to ping 4mm pellets in the hope of getting some fish shallow, a 14.5m line to the island and a short line at top 2+2. On all these lines I offered a banded 4mm pellet whilst also feeding via a cadpot and catapulting 4mm’s over the top. I also decided to set up a margin line to my right towards the corner where I would offer meat in the hope of finding some bigger fish“.

“It was a strange day’s fishing to say the least with me having to rotate lines every couple of fish in order to keep the fish going in the net. I had mostly F1’s, all about 1lb with the odd slightly bigger fish. At the scales, I weighed 57lb for second in my section and third on the lake, with 97lb winning and 72lb being second. The lake fished hard and it was a difficult day for most“.

“At the results, it was confirmed I had finished in third place overall in the Junior section, with William Mccranor smashing it with 142lb! Most importantly, however, the Northern team were confirmed Champions once again, having a lead of over 200lb over the Southerners“!

“It was a great event as usual with the fishing and the banter being great fun. Thank you to Carl Shepherdson and Gary Bull for organising the event. Congratulations to all the Northerners and commiserations to Mark Eves and his Southern team, but they put up a great fight! I am sure they will be back with a vengeance next year! Also thank you to Tunnel Barn for the use of their amazing lakes“!

From everyone at Maver (UK), well done Sarah!