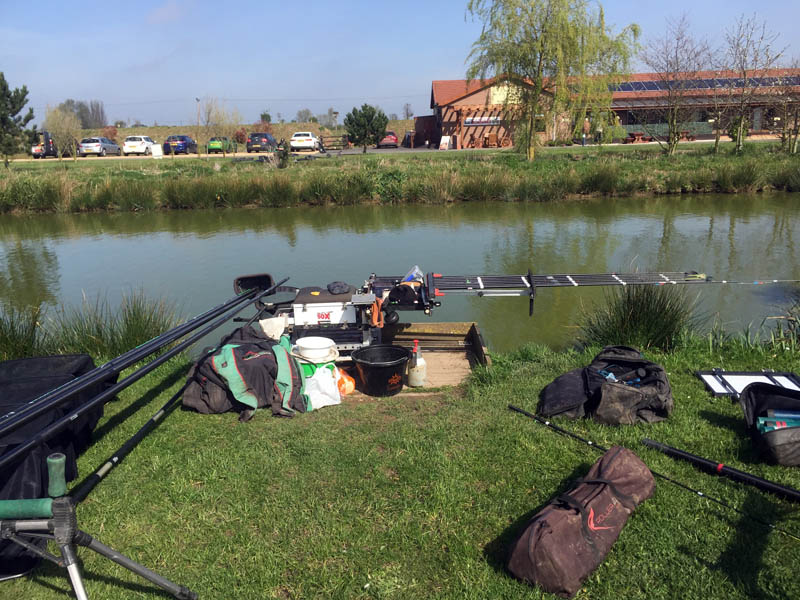 Maver North West rod, Tom Barlow, secured victory in the recent Les Colliet Memorial Festival, which was fished at Boston’s Westwood Lakes. Tom has an enviable record winning the previous two years events with high hopes of making it three out of three going into this latest five-day series.

The festival sees anglers on Skylark lake on Monday, Wednesday and Friday with Falcon being used on Tuesday and Thursday. Both lakes are very different from each other with anglers setting out their stall for big carp, F1s and big barbel during the first half of the festival before targeting small F1’s on Falcon lake to end the week.

Below, Tom reflects on what was another successful event which saw him claim his third overall victory in as many years. “My approach on this lake is simple – mud line with pellets; casters down the track, either shallow or worm over the top, then three edge lines; two in shallow water for carp and F1s and a deeper one for barbel“.

“I had a nice run across for a few hours with carp and f1s. The shallow line never really kicked off, but managed a few followed with some fish on worm fished to depth over the caster line. Then I rotated my three edge lines to finish the last two hours catching steady, but not solid. I ended up weighing 147lb for a section win and a match win – a great start“.

“Falcon lake is solid so the difference in winning and losing is down to a shear numbers game. The weather was horrendous with really a strong wind blowing straight down the lake. There’s only really two options on this lake and that’s the down the edge and shallow“!

“I set up two identical rigs for the edge and three shallow rigs. It was too windy to throw pellets over the shallow line accurately enough due to the wind, so I opted not to fish this line and concentrated, instead, down the edge with pellets. I ended up with two hundred and fourteen F1s for 165lb, which was good enough to win the section and the match overall“.

“The midway point of the festival was marred by horrendous weather conditions with a months rainfall falling in just a single day”!!!

“I set up the same lines as the previous Skylark match on the opening day of the festival abd started on pellets across. I had a nice run of fish before going on my shallow line, which I managed odd carp and F1s from before rotating my edge lines. I ended the match with 159lb, which was enough to win the section and the match. Three out of three“!

“The weather was lovely and warm for day four so at least we would all have chance to dry out the gear if nothing else“!

“I set up my stall in exactly the same way as the previous Falcon match. When plumbing the edges, the shallowest depth of water I could find was two foot, which I thought was going to be carnage! By the halfway point in the match, I’d had one hundred and fifty F1s from down the edge whilst priming my shallow line all the time. My earlier worries of carnage down the edge were spot on as foul hooked fish were fast becoming a bit of a problem, so I decided to force my shallow line. Fortunately for me, it paid dividends, with me catching as many as three fish a minute at its best!”

“I ended up finishing the match with three hundred and seventy seven F1s for 260lb for another section win and another match win. If that wasn’t enough, my perfect record throughout the four days so far meant I had effectively won the festival with a day to spare“.

“Feeling a bit worst for wear after a heavy night celebrating I decided to fish a real simple match concentrating on just the mud line and my edges. After the first hour, however, I abandoned the mudline and focused my efforts on rotating my edge lines. I managed to keep fish coming on a regular basis throughout the match to end with 177lb for another section win, match and overall festival win. Happy days!! Can’t wait till next year“.

“After the five days fishing, I ended up weighing a total of 908lb – what a venue! The place is epic“!!!

“A big thanks to team mate Franek Staniuszko for running it, and also well done on finishing in third place overall“.