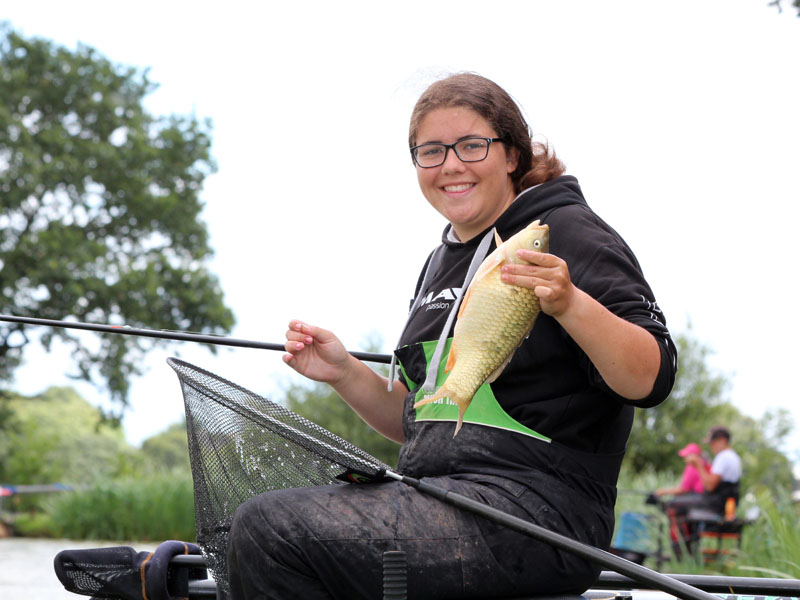 The annual junior Match-Aid festival took place on Wednesday 2nd August and concluded on Friday 4th August with thirty one (31) anglers aged between 15-18 taking part. The event was, once again, kindly hosted by Partridge Lakes, Warrington with the majority of the complex in use. The event was fished over three days with anglers being awarded points based on where they finished in their respective sections each day.

As well as the main event itself, there was also opportunity the children of all abilities to visit the venue over the three days to receive free coaching from the likes of Andy Kinder, Lee Edwards, Stephen Bowen, Macauley Pearson, Simon Skelton, Dave Watson and Gary Eccles. The coaching sessions were particularly enjoyable for the Maver sponsored anglers with a number of youngsters getting involved and homing their skills. Who knows, there may well have been a future World Champion amongst the ranks!

Competing within the three days festival itself was Maver’s own future star, Sarah Taylor. Despite some unfavourable draws over the three days, and a little bit of bad luck along the way, Sarah ended on a high recording a default section win to conclude this year’s festival on a positive.

Below, Sarah reflects on events that took place over the course of her 2017 festival. “Well, what can I say about the opening day other than it didn’t exactly go according to plan. The wind was howling from left to right, which completely ruled out my across line. I decided to use maggots shallow and down the edges due to the cold nights and the rain during the days leading up to the event”.

“Unfortunately, the fish didn’t come shallow, with me picking up the odd fish from my shallow line and my edge lines. I weighed 33lb for last in section, but picked up three (3) points because of a three-peg section being in our rotation“.

“I had a much better day than previously. I drew 10 on Marsh, which I was happy with as I was in the middle. I set up an across line, a shallow line (which I started on maggot and then changed to pellet) and two edge lines“.

“I started short to find a loansome F1, then changed to my across line where I caught a few. I then tried my shallow line, but I was being bothered by small silvers. I decided to change my approach on my shallow line and starting introducing pellet whilst fishing across and short”.

“After a couple more fish, I decided to go back over my shallow line, which by now, was producing steady for me. I stayed on this line for around three hours, at which point I then started to rotate between my edges, long and shallow to keep fish coming slowly for the last half hour“.

“At the weigh in, I weighed 67lb for a section second, beaten only by the end peg, who had six spare pegs to his right. I also want to say how fun it was hearing pinging noises four pegs away from James Allen losing six rigs during the match, and then the laughter from Rob Swan next peg along because of this!  After two days, I was on five (5) points going into the final day“.

“Unfortunately, the draw gods were not kind to me on the final day! I drew peg 143 on Covey 6, which is not a favoured area. To make matters worse, Rob Swan, who was on perfect points at this stage, had drawn the end peg in my section! I really didn’t want to take points off Rob, but I also didn’t want to be unfair to the others who were in with a chance of winning, so I fished to win the section to give a fair chance to everyone“.

“With the wind howling from left to right, it meant that the long line was, again, not an option. However, I was lucky in that that I had around four spare pegs to my right with me being in the three peg section. I set up five margin line: two short on a top kit plus one to feed with groundbait and corn; two longer lines at top kit plus three to feed with groundbait, and, finally, a deeper margin on a top kit plus two fed with maggots. I also set up a shallow line with caster“.

“I started on the top kit plus two line in the hopes of some early F1’s. However, this didn’t go very well, with only one F1 being caught on this line. I also tried one of my close in margins with pellets to see if I could catch anything, but this didn’t work either. It was then time to go on my shallow line and, if I’m honest, I didn’t look back and stayed on my shallow line for the rest of the match. Even though it wasn’t prolific, it was steady and with the section fishing hard, a steady run of fish was all that was needed“.

“At the weigh in, I knew it would be close between me and Rob. I weighed 71lb and Rob weighed 74lb to win the section with me coming second. I have to hand it to Rob – he fished incredibly well over all three days and it was great fun to have been against him most times throughout the festival. A definite credit to the sport“! “At the presentation, it was announced that Yestyn Sephton had won the event overall so a massive well done to Yiz. In second place was Rob and in third Jake Pope. Also, the winner of our age group was Jack Damant, so a big well done to everyone who framed. I managed to pick up a default section for the third day due to Rob being in the top three overall. I came 15th overall with seven (7) points. It wasn’t the best of festivals for me, but it was great fun and I enjoyed being with my mates and all having a laugh together“!

“Finally, I also want to thank Maver (UK) for their continuous support and faith in me“.

Well done to all the competitors that took part in this year’s event. The standard of junior fishing on display this year was superb and all thirty one anglers should be very proud of their individual performances on each of the three days. A big well done to Yestyn Sephton, who as well as being awarded an impressive trophy, also received a Darkside Series 1 pole package for his efforts.