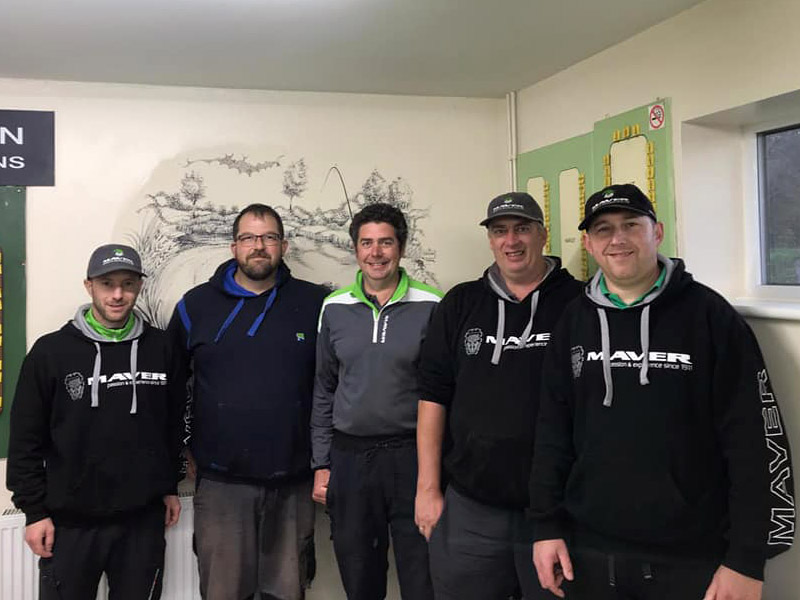 Below, team Captain Andy Taylor provides a round by round account from what was a successful campaign for the blue team, which saw them finish five (5) points clear at the top of the table. 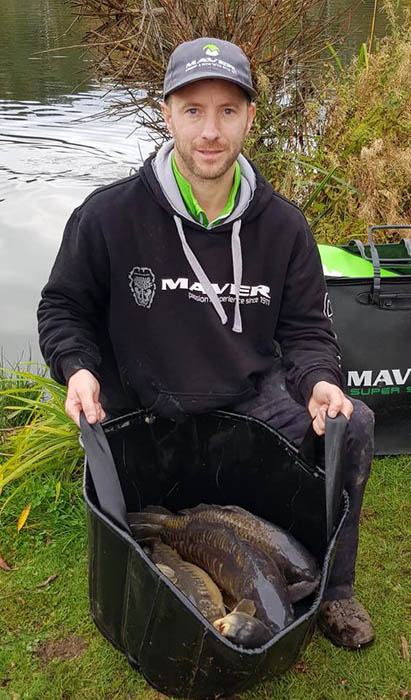 Maver Harescombe (blue) team member, Rob Kerslake, with part of his section-winning catch from round 2 of the competition

“Fishing on the opening round of the event was hard on account of the rain being relentless all day. The team enjoyed a fantastic start to the league at Woodlands View. Matty Hamilton started the league recorded an outstanding result picking up a section win as well as an overall win on the day. Rob kerslake also enjoyed a great start also recording a section and overall lake win“.

“Matthew Hamilton caught well on his top kit plus one line over micros alternating between lines to keep fish coming to the net. Rob managed to find odd fish long at 13m and short at 5m before his top kit line and left and right margins came alive. Expander on the hook over micros and dead reds down the margin were the bait of the day“.

“After the opening round of the competition, the blue team found themselves lying in second place overall – a very pleasing start to the league“.

“After a brilliant start to the league, which saw the team finish in second place the week before, we were keen to go one better. An awesome performance from all the team, even from pegs that hadn’t enjoyed any recent form, saw Maver Harescombe blue secure overall victory on the day“.

“Rob Kerslake finished with 86lb from peg 33 on Front Deans to record a default section win. Team mates Matty Hamilton and Steve Brown also returned good results. Matt weighed in 67-08-00 to record yet another great result managing a section win and finishing in second place on his bank.
Steve Brown also finished in 2nd place overall on his lake weighing in 92lb“. 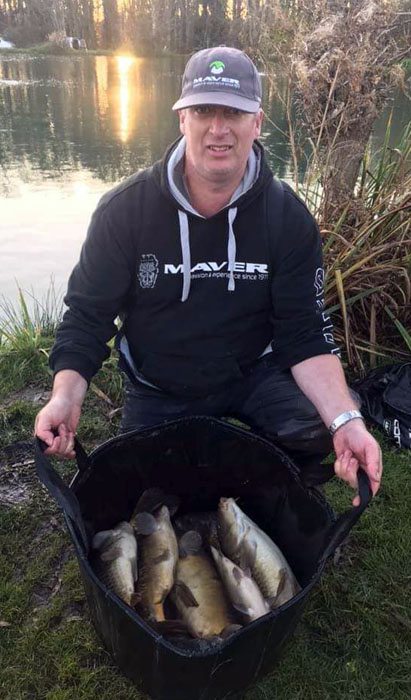 Jason Powell with part of his 110-06-00 final round catch, which saw him finish in second place on the day

“Round three was the team’s worst round of the four with the team as a whole finishing in fourth place out of the ten competing teams”.

“Jason Powell managed a section and lake win from peg 21 on Front Deans offering 67lbs to the scales fishing long down his edge into the corner with maggot. Team mate Matt Hamilton finished second on Arles lake from peg 8 with a weight of 68lbs, which was enough to see the team as a whole finish with nineteen (19) points“.

“After three rounds, the team found themselves in second place just two (2) points behind league leaders Mosella MGM (blue), so a good result was needed on the final round to stand any chance of snatching overall victory“.

“On the day the draw proved resonable for all. Jason Powell had drawn a good area in peg 24 on Front Deans. Jason opted to set up lines to fish everywhere, but ended up catching down the first shelve on maggots and, in the last two hours, enjoyed a steady run of good sized carp to finish with 110lbs. Unfortunately, Jason would have won the match but was knocked back on weight for having too many fish in one of his nets“.

“Matt Hamilton endured a hard match plagued by the wind, which filling his swim up with leaves. Despite this, Matt persevered to win his section“.

“The team, which consisting of Robert Kerslake, Jason Powell, Steve Brown and Matty Hamilton, finished in second place overall on the day, which was enough to secure overall victory“.

“Maver Harescombe would like thank Mike, Ade, Dee and Gary Kirkham for organising and running a great league“.