Match This Qualifier no. 4 – Heronbrook Fisheries

Maver Match This qualifier number four was held at the popular Heronbrook Fisheries, Slindon. With a marked improvement in conditions across the country, the resident carp and F1 stocks exploded into life with this latest qualifier producing some fantastic weights! Many anglers before the start of the match wanted to draw on Match lake and, with six (6) of the top eight (8) weights from the day all coming from this one water, it wasn’t difficult to understand why! 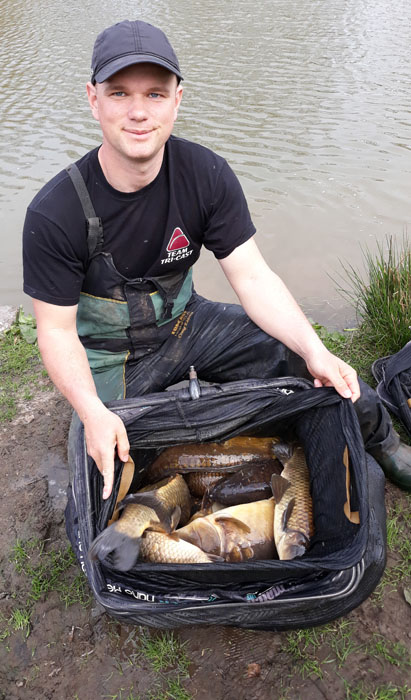 Craig recorded the largest ever weight in a Match This qualifier event at Heronbrook to book his place in the 2018 Grand Final.

Winner on the day, and the next angler making his way through to September’s big money final at Maver Hayfield Lakes, was Craig Ebbrell (Team Tri-cast). Craig drew peg 4 on Match Lake and enjoyed a fantastic day fishing short at five metres for the majority of the match with meat to catch a total of eighty one (81) fish for an outstanding 358-04-00 including carp to 18lbs and F1s to 8lbs. Craig’s qualifying weight on Saturday is the largest recorded weight of any Match This qualifier since the competition began back in 2011 and not only places him in September’s Grand Final, but also see’s the Manchester-based man automatically qualify for this year’s Maver British Pole Championship final, which takes place two weeks before the Grand Final.

Finishing close behind Craig with an equally impressive weight was Maver Gold rod, Ashley Davies. Ash drew peg 6, also on Match Lake, and fished meat up in the water for the first three hours of the match before coming short and down his edge late on, again with meat, to find carp to 15lb to put a total 335-02-00 on the scales. Ashley also books his place in this year’s British Pole Championship final.

Taking third place on the day, and the last of the automatic British Pole Championship qualification places, was Jason Benning. Jason drew peg 12 on Match Lake and caught the majority of his 206-04-00 from down his edge on corn fished over micro pellets. At the end of the five hours, Jason had ninety five (95) F1s and two (2) carp, the biggest of which tipped the scales at 8lb, to finish ahead of James Howarth who, with 192-09-00, had nothing to show for his efforts – not many venues you can say that about!