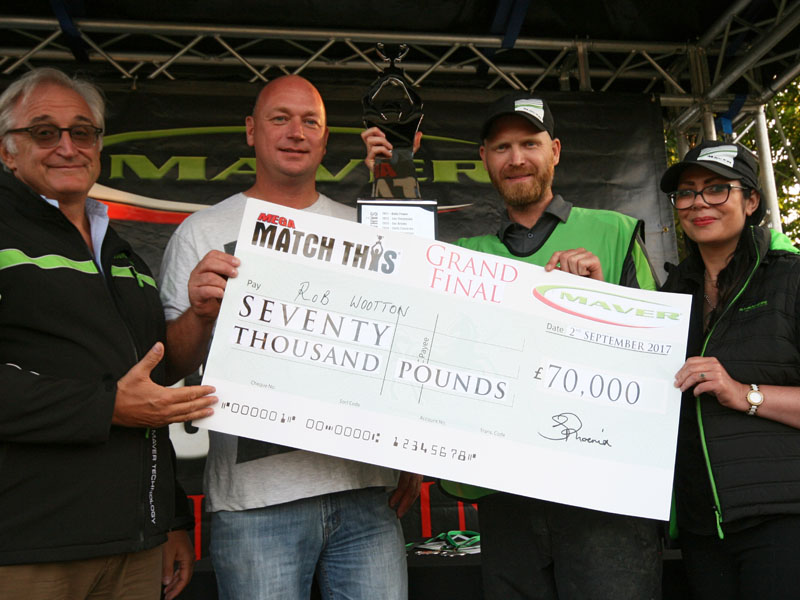 Saturday September 2nd 2017 marked the conclusion of the seventh annual Maver Mega Match This event at Maver Hayfield Lakes. Twenty four qualifiers staged at the country’s top commercials starting in April right the way through to August had produced twenty four (24) of the UK’s best match anglers and, arguably the strongest big money final EVER on paper. All of whom were competing for the richest prize in UK match angling history at a massive £70,000 and to have their name forever written into the history books and onto the iconic Mega Match This trophy alongside the biggest names in the sport.

Anglers drew for their pegs the night before during a special gala evening event, which was staged at the superb onsite Hayfield Fishing and Shooting Lodge with all competing finalists and their guests enjoying food, drink and live entertainment. Upon the draw being complete, many of the competing anglers were still none the wiser as to who they felt would be in with a chance at the following day’s purse such is the standard of fishing on offer on Dannies (Island) Lake. With some very good anglers in good areas, the 2017 Grand Final was a tantalising prospect!

Come the morning of the match, spectators turned out in their droves thanks largely to conditions on the day being much kinder than the previous year and the efforts of the Hayfield Lakes staff, with outside bars, food and entertainment all contributing to a fantastic day out for supporters and bystanders. The standard of sport was, once again, fantastic with competing anglers finding fish shortly after the all in was signalled at twelve noon. After the first hour of the competition, a number of anglers had begun to put their stamp on the day’s events and were making their presence known during the opening stages. One such angler was current Fish O Mania Champion and MAP backed Jamie Hughes. Jamie had drawn Match This peg number 1 (permanent peg 3) close to the railway line, which was an area that didn’t produce in 2016’s final. However, Jamie was into big fish early on finding a number of carp up in the water to shallow tactics putting himself in early contention. Further along on Match This pegs 8, 9, 10 and 11 (permanent pegs 19 – 25) an interesting battle between Kieron Rich, Andy Power, Rob Wootton and Chris Cameron had begun to emerge with all four men getting off to a great start. With two hours of the match gone, no one was able to single out a clear leader amongst them. For those anglers that had drawn on the ‘Wood bank’, things got off to a slower start. Local rod Andy Bailey, who many had tipped as being a potential favourite going into this year’s final given his extensive knowledge of the venue, like many, were struggling. With the sun being late to make its way round, much of the bank remained in the shade for a large part of the match with it being noticeably cooler for the twelve finalists that had drawn Match This pegs 13 – 24. It wasn’t until much later on in the match the sun made its way round and action started to hot up with Colmic’s Jamie Wilde getting into his stride alongside commercial mastermind, Andy Bennett. Maver’s own Sam Brown also found the fish at this point and was gaining some serious ground on the front runners with rumours circulating on the bank he may well have nudged his way in front with three hours gone. As the match entered the final stages, Preston’s Andy Power really upped the ante and was now landing more fish than anyone else around him. Chris Cameron (Middy) also staged a late charge catching some very large fish late on. Between them, both men were looking good for being the first man ever to win the Mega Match This final for a second time. Rob Wootton (Dynamite Baits), however, was also still catching steadily on the bomb and pellet, but his early lead was now looking a little less certain as the match entered the final sixty minutes.

As the match wore on and approached its conclusion, Rob Wootton’s place at the top of the field was looking more and more in doubt with Andy Power and Chris Cameron finding big fish late on. Unfortunately for the anglers pegged on the opposite bank, just as soon as the fish had showed a willingness to feed, they had stopped again leaving Andy Bennett looking like the only man capable of challenging the top few.

Upon the final hooter sounding, it was Rob Wootton who had the final say with a decent-sized carp gracing his net within the allowed fifteen minute time limit. It was genuinely too close to call at the end of five hours with opinion on the bank divided as to who had done enough at the end of another thrilling finale involving three anglers, two of which were former Champions vying for their place in the history books. Social media was alive with predictions and hypotheses following live updates from Andy Kinder and Graeme Wall, but nobody knew who had done enough. Upon the scales making their way round, weights on the river bank were extremely close with very little separating Match This peg 1 – 6 (permanent pegs 3 – 15). Andy Power was the first of the three front men to weigh in, confirming a weight of 37.050 kilos to take the lead topping Jamie Hughes’ 31.500 kilos. Andy’s lead was short lived, however, with Rob Wootton confirming a weight of 42.175 kilos instantly quelling the hopes of Andy Power fans both on the bank and at home watching via social media. If Chris Cameron was unable to top Rob’s weight, would this be enough to see the Leicestershire based rod crowned 2017 Maver Mega Match This Champion?

Chris weighed in 39.800 kilos meaning all eyes were now on the ‘Wood bank’, where only one angler was rumoured to be in with a chance of cutting Rob’s celebrations short. Maver’s Sam Brown weighed in 27.425 kilos, which remained the best recorded weight until the scales reached Manchester-based Andy Bennett. After three weighs, Andy confirmed a final weight of 36.675 kilos with just Jamie Wilde to beat. Upon the scales arriving with Jamie, his mid-match run of form saw him return 28.375 kilos. Upon the last remaining finalist weighing in word had reached the main stage that Rob Wootton was the new 2017 Maver Mega Match This Champion. Despite fantastic last minute efforts from both Andy Power and Chris Cameron, Rob held his nerve and stuck to his game plan and emerged victorious topping what many regarded before the final as being the strongest field of twenty four (24) anglers ever in a Mega Match This final.

Upon being confirmed the seventh Mega Match This Champion in as many years, Rob was soon swarmed by the angling press just moments after receiving the iconic trophy and soaking with crowd with a nice vintage. A huge congratulations to Rob, who incidentally, was the very first man to qualify for the 2017 Mega Match This Grand Final. Rob now cements his place in angling history as being the seventh Mega Match This Champion and receiving £70,000 alongside previous Champions Andy Power, Les Thompson, Zac Brown, Chris Cameron, Peter Upperton and Jon Whincup. “A couple of early fish short on the pole before a great run on bomb and pellet gave me a pretty good first half of the match before my peg dwindled and I just picked up odd fish as others started to catch up. Luckily, I managed to hold on and my forty two kilos was enough to win the jackpot prize of £70,000 – a massive amount of money”.

“I’ve got to thank Maver for running the event and also Hayfield Fishery, all the guys that came to support me and, finally, my wife. I put a lot into my fishing and she has to be quite understanding”.