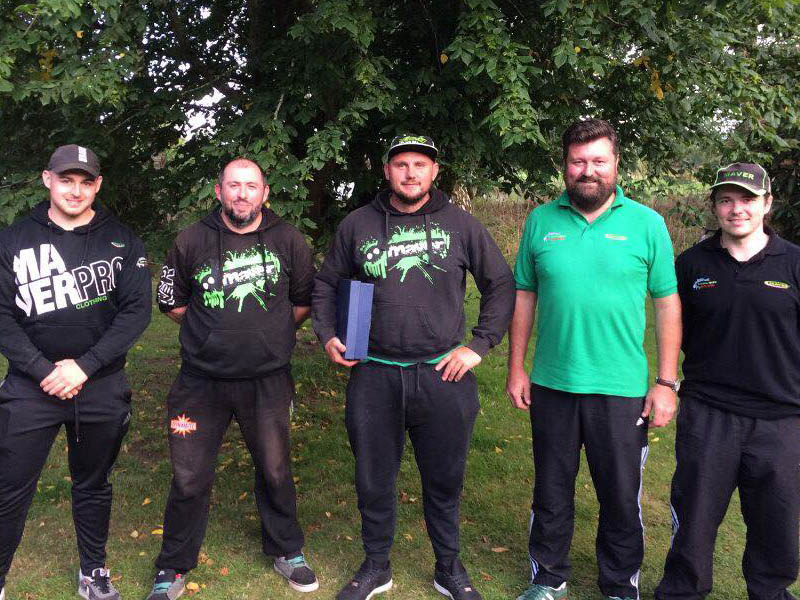 Saturday August 19th marked the annual Angling Trust Masters at Midlands-based bagging mecca, Mallory Park Fisheries in Leicestershire. Forty two (42) anglers competing in teams of six went head to head to be crowned AT Masters Champions. Numbers were, unfortunately, a little down on previous years on account of the event clashing with other major events, but that didn’t take anything away from what was a fantastic event with a total of sixteen weights over 100lbs.

It was a clean sweep for the Maver Midlands team with both individual and team honours being confirmed on the day. Individual winner of the event was Maver Midlands’ Trevor Robinson with 186lbs from peg 85 on Lake 5. The Team championship resulted in a close finish with just a few points separating the top three teams, but it was Maver Midlands who came out on top with a score of seventeen (17) points to finish ahead of both Mallory Park Team Red and Shakespeare Superteam.

Below, Trevor Robinson reflects on his individual victory and the team’s performance as a whole.

“Taking part in a great team event like the Angling Trust Masters is something within the match angling calendar I get really excited about! I love the fishery and it attracts a fantastic field of anglers to go up against“.

“After the team’s draw, I found myself on peg 85 on lake 5, which on the day, was an end peg but the wind was blowing in the opposite direction to what I would’ve wanted. I wasn’t too sure if it was going to be a problem given the form of lake 5. I was certain I would need to secure maximum points in order to win the lake“.

“I started the match short at five metres fishing 6mm hard pellets, feeding 6-10 by hand after each fish. I caught ten (10) carp on this line during the opening hour whilst priming my line up the bank to my right, where I was planning on doing the same, but in less water with around 3ft” .

“I had a look on my inside line after a couple of hours and it was solid with carp! I caught steady on this line for the next two hours. At this point in the match I estimated I had around 120lbs with an hour still to go so I started to feed my left edge with corn heavy in an effort to target some bonus edge fish to boost my weight. Looking down the lake, I could see carp were being caught from down the edge elsewhere so it was time to have a look. I managed seven (7) big carp, which when offered to the scales, boosted my final weight to 186lbs“.

“After the remainder of the lake had been weighed, it was confirmed I had done enough to win the lake overall so the points I needed were in the bag. At the presentation I had no idea how the rest of the team, or myself had finished overall, even though I knew the team had all come back with great points. Upon the results being announced by fishery owner Roy Marlow, I was over the moon to learn I had won the event individually. The icing on the cake, however, was my Maver Midlands team of six had won the day and were confirmed Angling Trust Masters Champions 2017”

“A great team achievement with the event now being a well established Angling Trust competition. As a team, it’s another accolade on our angling CV which we’re all really proud of” .