The Maver Royal Navy team have just got back from the Annual week-long Inter Services event fished against the RAF and Army teams. Even though all three (3) Services fish in national events, competing teams often view the gathering of the UK Armed Forces team as a whole as the event to win!

This year the event was hosted by the Army at Forest Lane Fishery in York – about as far from the Royal Navy’s bases as you can get! Not deterred the Royal Navy team arrived at the venue ahead of time ready for three (3) days of practice confident that we could get to grips with the venue before the main event.

Below, Team Captain Stephen Mardlin looks back on what was a great event which ended in a fiercely contested battle that went down to the wire. 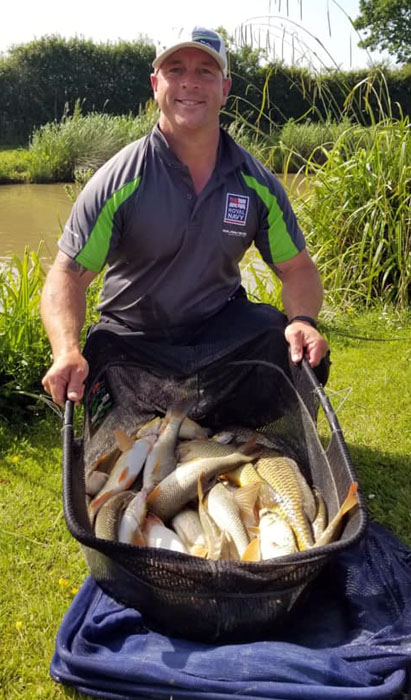 Maver Royal Navy team member, Adam Palmer, with an impressive catch from day two which was one of three section wins for the team on the day

“Most of the team had new Maver Signature 800 Pro poles with green Dual Core Pro elastics through the Maver Signature Smoke One Piece power kits for what was supposed to be a match all about shallow fishing. Rain, thunder and strong winds were a feature of the practice days, whilst sun and light breezes appeared for the match days at the end of the week“.

“First match day and the three (3) teams had slightly different tactics, and all were brimming with confidence. As is turned out the RAF got it right and took a great lead with twelve (12) points whilst the Army and Maver Royal Navy were both on eighteen (18). Six (6) points is a hard lead to chase“.

“After a team discussion we left the first team of eight (8) unchanged and tweaked our approach for the second day of competition determined to beat the Army on their home turf, and push hard to win“.

“The Maver Royal Navy team put in a brilliant display on the second day, recording three (3) section winners – Graham Parker, Adam Palmer and James Parry – (the latter two were also lake winners and 1st and 2nd individuals on the day) and, with another consistent performance from the other team members, the team took day two honours. This left us agonisingly close to the RAF, who managed to hang on to their lead by a single point, with the Army just one point behind us“!

“The passage of information and team cohesion were key to the success and the bank runner’s, led by veteran Joe Gillespie, were as important to the team’s success as the guys fishing. A monumental effort from the team, and we host next year“.

“A big thank you to our Sponsors Maver (UK) for helping out with all the gear“.